Is Google Adding UX To The Mobile Ranking Algorithm?


The rumour is out and it’s probably not too surprising.

A number of sources are claiming that Google could be set to use mobile user experience as part its’ ranking algorithm. The notion of this isn’t new (we already know that site speed is a ranking factor for mobile) but the resurgance in discussion means it may not be too far off.

In May 2014 Ben Goodsell published a post on Search Engine Watch on How to Avoid Mobile Ranking Pitfalls by Assessing Mobile Engagement. This article discussed such things as the delivery of design, with Google’s preference being responsive. In addition, other metrics were reviewed such as bounce rate and usability. Also in May, Web Dev Door listed simialr items in their article 14 Mobile UX Factors That Could Impact SEO.

This week saw Barry Schwartz post Google May Add Mobile User Experience To Its Ranking Algorithm at Search Engine Land. He goes on to explain why mobile UX is important but that it is not a ranking factor – for now.

So, what’s a webmaster to do? Why, test of course. There are a number of mobile emualtors where you can test your mobile site such as the mobile phone emulator by COWEMO. 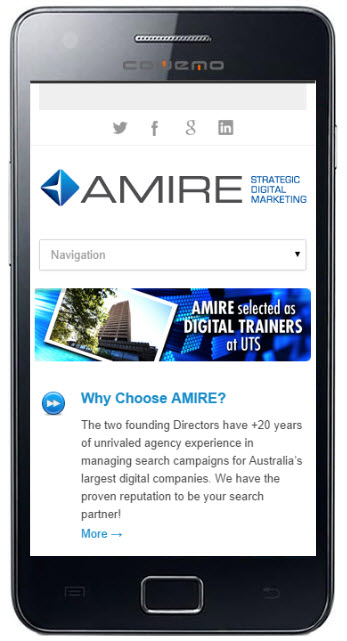 There’s also a mobile option to test a sites’ speed at GTMetrix. You should also test it yourself on various devices and get your family and friends to test it (buttons, links, scrolling) and provide feedback. You can also use the Fetch function in Google Webmaster Tools. Simply login to your account and click on Crawl –> Fetch as Google. Select Mobile: Smartphone from the drop down and click Fetch and Render and wait for the results:

If you want to take a deep dive use this terrific Mobile Site Audit Checklist at Moz.