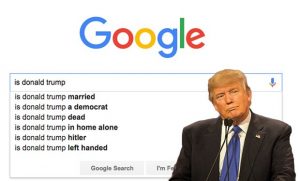 [/one_half] [one_half_last]
In an interesting turn of events, the republican candidate Donald Trump has accused Google of a conspiracy to rig search results. Yes, you read that correctly. He is under the impression that Google is burying any bad press related to the Democratic candidate Hillary Clinton.

If you just raised your eyebrows, put them down….and the other one.
[/one_half_last]
This news should not surprise you. This is coming from the same man who until recently believed that Barack Obama was born outside of the United States, who wants to ban Muslims from entering the United States, who believes China created global warming, and who has continuously made sexist comments in relation to women. To put it simply friends, this man is the comments section of YouTube running for president.

As a result many have wondered how a man with obvious preconceived notions on race, gender, religion, politics etc. is supposed to be trustworthy with the nuclear launch codes. Of course, this one is for the voters to decide.

Getting back to the conspiracy, on Wednesday during a rally in Wisconsin he made this rather interesting comment:

“The Google poll has us leading Hillary Clinton by two points nationwide, and that’s despite the fact that Google’s search engine was suppressing the bad news about Hillary Clinton. How about that?”

Trump is yet to respond to requests for comment on the alleged “bad news” to which he is referring. This comment comes just two days after the presidential debate between himself and Hillary Clinton, which saw Hillary win the debate with a well formed and coherent argument. She also managed to make the comment of the night, which left Trump nursing a rather impressive burn:

“Trump just criticized me for preparing for this debate. You know what else I prepared for? Being president.”

His suggestion that Hillary Clinton and Google are in collusion, is not the first time he has made such comments. Back in June, he accused the search engine of manipulating their autocomplete function. The autocomplete function uses an algorithm that provides users with suggested search terms once they start typing a query.

Google commented on these allegations and stated that it does not populate any negative terms when paired with a person’s name. For example, if I were to type ‘Hillary Clinton silly’ into Google Search, I would not be given an autocomplete result. If I scale the query back then I am provided with the following autocomplete results:

The same occurs with a Donald Trump based search:

This would be a great time to interrupt someone 51 times and yell WRONG!

This effectively disproves Trump’s claims, and yet he is still under the impression that Google is manipulating its search results in favour of Hillary Clinton. I’m Drumpfed! (In case you hadn’t heard, it turns out that Trump’s family name was originally ‘Drumpf’, which coincidentally makes for a wonderful adjective!)

We thought it would be a good idea to explain how Google crawls, indexes and serves content for Google Search. I don’t know how to put this, but I’m kind of a big deal. I know the Google well. The Google and I are Mono A Mono. If you picked up on my Anchor Man quote then props to you!

So without further ado, here are some quick facts on how Google Search works:

To start, Google does not manipulate search results. It ranks stories based on the relevance to the user’s query. For example, if my search query is ‘Hillary Clinton criticism’, you will be served with results that look something like this: 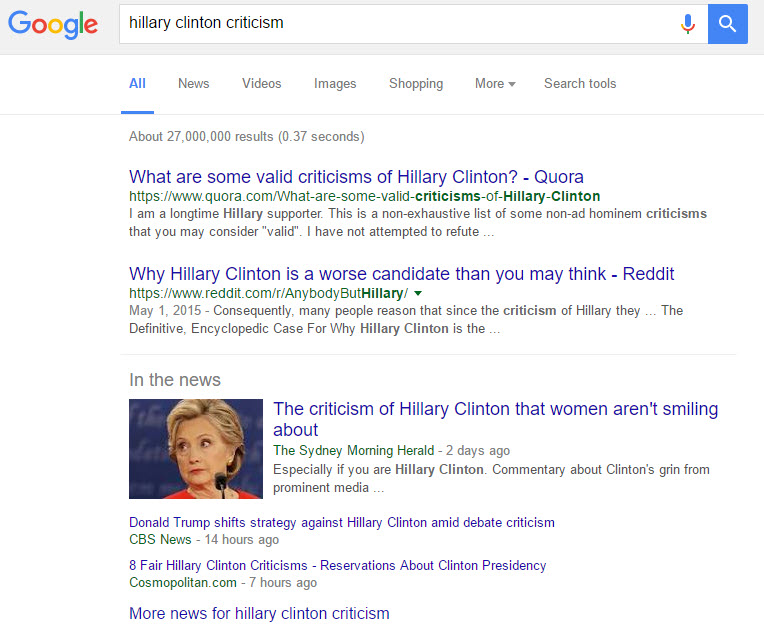 Please keep in mind that my search results may differ from yours. This is because Google ranks search results based on the relevancy to you. It uses more than 200 factors to serve a set of results, and this can also be influenced by your previous search history among other things.

Now as you can see in the image above, the first result is from Quora, and is a question regarding valid criticisms of Hillary Clinton. Under the ‘In the news’ results you will see very relevant news articles to my query. I am looking for ‘Hillary Clinton criticism’ and that’s what I’ve been given.What you can’t see is what the algorithm does behind the scenes when I begin the search.

Google starts by crawling publically available content across the web. It uses web crawlers to achieve this. One of their most well-known crawler’s is Googlebot. After crawling these pages, Google collects these pieces of content for its index. Following that, it uses algorithms to determine which content should be served to a user and for what queries.

As previously mentioned, Google uses algorithms which rely on more than 200 signals to serve a user search results. Some of these signals include terms on the website, freshness of content, your region and PageRank. It is important to note that many of these signals will never be revealed to us. Backlinko has an in-depth article, which discusses what it believes these 200 ranking signals to be.

Donald Trump’s comments basically accuse an algorithm based system of manipulating search results in a conspiracy against him. This would mean that the computers have caught up. They’re onto us people! They are manipulating us. If anyone asks for me, I’ll be wearing a tin foil hat in the middle of the desert. Try and get me now!